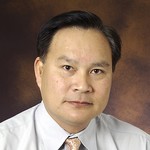 Tien is currently Senior Technical Advisor and Manager of the Batteries for Advanced Transportation Technologies (BATT) Program (http://batt.lbl.gov/). The focus of the BATT program is conducting research and development on the next generation of battery technologies for vehicle applications. He was manager of the Energy Storage R&D effort from 1999 to 2003, and was team leader of the Hybrid and Electric Systems Team from 2004 to 2008. Tien has been a member of the United States Advanced Battery Consortium (USABC) Technical Advisory Committee and Management Committee.

Tien studied Chemistry at the University of Saigon, Vietnam before emigrating to the United States in 1979. He holds a B.S. in Electrical Engineering and an M.S. in Civil Engineering, both from Virginia Tech. Tien is a licensed Professional Engineer in the state of Virginia

Karen Ballar graduated from University of California, Berkeley. Currently, she is Acting Senior Commercial Officer in U.S. Department of Commerce. She is helping U.S. businesses export their goods and services. She is passionate about marketing, social media, economic development, economic impact of tourism, the power of public relations. She has received many Honors & Awards, including Tribute to Women and Industry, Idaho Business Review Women of the Year, and Mercury Award for Best Overall Program.

Dr. Liu is the Director of the Energy Processes and Materials Division within Pacific Northwest National Laboratory’s Energy and Environment Directorate, a position he has held since March 2013. Dr. Liu possesses a strong background in materials synthesis, colloidal and surface science, and high-resolution electron microscopy. He joined PNNL in 1992, became a Laboratory Fellow in 2000, and over time initiated and led a broad range of basic and applied research programs in materials science.

In 2001, he left PNNL for a position with Lucent Bell Laboratories, and later Sandia National Laboratories, where he served as manager of the Chemical Synthesis and Nanomaterials Department, and as a thrust leader in the Center for Integrated Nanotechnologies. Dr. Liu returned to PNNL in 2005 to head the synthesis task within the catalysis initiative, and also led the Transformational Materials Science Initiative, as well as energy storage research. In addition to his division director role, he currently serves as the Cross-Science Lead on the Joint Center for Energy Storage Research, a DOE Energy Innovation Hub in which PNNL is a partner.

Dr. Liu has more than 350 peer reviewed publications, has received more than 55 U.S. patents. He was named a Distinguished Inventor of Battelle in 2007 and was selected as PNNL’s 2012 Inventor of the Year. He holds a bachelor’s degree in Chemical Engineering from Hunan University, a master’s degree in Ceramic Engineering from the University of Washington, and a doctorate in Materials Science and Engineering, also from the University of Washington.

Born in Brittany (France), she has a French Engineering degree in applied physics, a Ph D in plasma physics, a French Habilitation thesis in materials science and a Bachelor of Music degree in Jazz from the ANU (Jazz drums and Jazz arrangement and composition). For the past twenty years, she has been working on experimental expanding plasmas (hot ionized gases) and their applications to electric propulsion, microelectronics and optoelectronics, astrophysical plasmas, and more recently to the development of fuel cells for the hydrogen economy. She is the inventor of the Helicon Double Layer Thruster, a new type of space engine, which applications include satellite station keeping or interplanetary space travel. In 2009 Christine received the Australian Institute of Physics Women in Physics Lecturer of the year award. She actively popularises her science on ABC Catalyst, Discovery Channel, radio and public lectures. She enjoys playing music, surfing, canoeing, cycling and bushwalking.

He is also the program leader of the Energy Program in the ARC Centre of Excellence for Electromaterials Science. He holds Adjunct appointments at the University Alabama and Queens University Belfast. He was a PhD graduate from Professor Austen Angell’s group at Purdue in 1982 and after postdoctoral fellowships in France and New Zealand took up an academic position at Monash in 1983. He was appointed Professor of Chemistry in 1995 and served terms as Deputy Dean of Science 2000-2001 and as Head of School 2003-2006.

Professor MacFarlane is a member of the Scientific Advisory Board of Cap-xx Ltd, Chair of the Scientific Advisory Board of Ioteq Inc and is a member of the Board of Governors of the International Society for Solid State Ionics. He has served on the Australian Research Council’s Physical Sciences Expert Advisory committee. He serves on a panel of international experts that advises the German national science foundation.

Since 2001, Dr Cheng has been involved in the research of nano-TiO2 based dye sensitised solar cells (DSSCs). His work in this area mainly lies in the development of nanostructured working and counter electrodes, and construction of solar cell devices. He has special interests in the engineering aspects of the DSSC technology. In recent years, he has made focused efforts in the development of flexible DSSCs on plastic substrates and processing of DSSCs by printing technologies.
He is a chief investigator of the novel ceramic-polymer composites for fire-performance cable applications in the Cooperative Research Centre for Polymers. This award-winning technology has been commercialised by an Australian company.

He was formerly a Director of CSG Solar, a company formed specifically to commercialise the University’s thin-film, polycrystalline-silicon-on-glass solar cell. His group’s contributions to photovoltaics are well known including the development of the world’s highest efficiency silicon solar cells

Prof. Rose Amal is a chemical engineer and the leader of the Particles and Catalysis Research Group. Previously she was also the Director of the ARC Centre of Excellence for Functional Nanomaterials (2010-2013). Professor Rose Amal is recognised as a pioneer and leading authority in the fields of fine particle technology, photocatalysis and functional nanomaterials having made significant contributions to these related areas of research over the past 15 years. Her research contributions span from fundamental chemistry to applied chemical engineering fields; from material science and nano-research to a specialised photochemistry field. Her current research focuses on designing nanomaterials for solar and chemical energy conversion applications  (including photocatalysis for water and air purification, water splitting, development of indoor self-cleaning materials, low temperature catalytic reactions) and engineering systems for solar induced processes, using the sun’s energy as a clean fuel source.

Over the last 10 years, she has successfully attracted over $22M to UNSW from the Australian Research Council and industry partners (including the ARC Centre of Excellence for Functional Nanomaterials, ARC Laureate Fellowship, 6 ARC Discovery grants, 9 ARC Linkage Project grants, 8 ARC LIEF grants, and 3 ARC Linkage International Awards). She has published > 290 publications which have cumulatively received over 7500 citations, resulting in an H-index of 47 (as of October 2014, SCOPUS).

She has successfully supervised over 30 PhD students, 5 Masters students and more than 80 honours students in fields relating to environmental and energy technologies, including 8 University Medalists and over 20 Australian and International Postgraduate Award Holders.

Professor Rose Amal has received numerous prestigious awards including: being listed in the Australia’s Top 100 Most Influential Engineers in 2012, 2013 and 2014, the ExxonMobil Award (2012), the Judy Raper Women in Engineering Leadership Award (2012), the NSW Science and Engineering Award – Emerging Research  (2011),  the UNSW Scientia Professor (2009), the Freehills Award (2008), and the UNSW Vice Chancellors Award for Research Supervision Excellence (2003). She is a Fellow of Australian Academy of Technological Sciences and Engineering (FTSE) and Fellow of Australian Academy of Science (FAA).

Esther Levy is Consulting Editor for Wiley’s leading materials science journal Advanced Materials, Editor-in-Chief of Advanced Materials Technologies, and Editor of the premium open-access general science journal Advanced Science. After completing her Ph.D. in physical organic chemistry at Cambridge University (UK) in 1997, Esther joined the Advanced Materials editorial team (Wiley-VCH, Germany) where she was appointed Editor-in-Chief in 2002. In January 2007, Esther relocated to Sydney to take up the position of Senior Commissioning Editor for Wiley’s physical sciences book and journal publishing program in the Asia-Pacific region. She has been in her current role since 2011.